This post brings you the week’s “Top news for geothermal development and GEA members,” including the latest updates on the upcoming Geothermal Energy Expo, delegates that will be visiting from East Africa, and comments on energy market tax needs from U.S. Senate leadership.

But first, the map above shows geothermal prospect areas in East Africa’s Rift Valley region. This month the Geothermal Energy Association looks forward to hosting delegates from Djibouti, Kenya, Tanzania, Ethiopia, Rwanda and Uganda here in the U.S. through our Africa-focused sister organization in the USEA, the East Africa Geothermal Partnership. The visiting government and industry officials are interested in working with U.S. companies as they tap into the estimated 15,000 MW of potential geothermal capacity in the Rift Valley area.

Click below to keep reading “This week’s top news for geothermal development and GEA members.”

Senate Leaders on Both Sides Signal for Action on Tax Extenders
This week Senators on both sides of the aisle commented on the need to renew expired tax provisions. The legislation includes the extensions of the tax credits for geothermal, wind, and other renewables for two years. The geothermal tax credit expired on December 31, 2013.

Finance Committee Chairman Ron Wyden said, “Today, American businesses of all sizes are making their required quarterly tax payments to the IRS and trying to chart their path forward for 2014 and beyond,” Wyden said. “At a time when entrepreneurs and innovators should be identifying investments to support their business strategies and pursuing growth opportunities, Congress’s failure to renew expired tax provisions is forcing these companies to make “no interest loans” to the federal government through higher taxes. It’s unacceptable that inaction by Congress is denying American business the clarity and certainty they need to plan for tomorrow.”

He added that the United States “is falling further behind its economic competitors, like Germany and China, in transforming its energy markets.”

Senate Minority Leader Mitch McConnell said this week that much will depend on what happens in the lame duck session. “Hopefully we can agree to do some things together that need addressing. The extender package I think is one of them. And we’ll talk about how to put that together once we’ve got the election behind us and while we’re talking about what to do for the balance of the year,” he said.

Rep. Blumenauer and Numerous Co-sponsors to Introduce Legislation for Clean Energy Incentives Including Renewable Tax Credit Extension
This week in the U.S. House, Representative Earl Blumenauer (D-OR) and numerous co-sponsors are expected to introduce legislation titled “Bridge to a Clean Energy Future Act of 2014,” which seeks to address impacts of climate change through extending critical clean energy incentives, including those for homes, vehicles, and facilities producing renewable energy.

For geothermal, the provisions include the extension of the investment tax credit and production tax credit through December 31, 2016–a year longer than the extension offered in the current Senate legislation (see story above). The Geothermal Energy Association will report on the progress of the bill, and you can check for updates from Rep. Blumenauer at http://www.blumenauer.house.gov/.

Geothermal Industry Leaders from Around the Globe to Convene in Oregon
Portland, Ore. (September 12, 2014)–From Oregon to Rwanda, the 2014 GEA Geothermal Energy Expo will take geothermal leaders around the world in geothermal development. The Expo, co-held with the GRC Annual Meeting, is the premier gathering to learn about the latest developments in geothermal energy. In 2013, the GEA Expo and GRC Annual Meeting hosted representatives from more than 37 countries. The event will run Sept. 28 to Oct. 1 in Portland, Oregon and host technical, policy and market conference sessions, educational seminars, tours of local geothermal and renewable energy projects and numerous networking opportunities.

Each year, the Expo serves as a world-class gathering of geothermal companies, academics, financiers, policy leaders and other individuals to learn about the latest developments in geothermal energy. The Expo floor features a unique opportunity for leaders in the business to showcase their projects, equipment, services and state-of-the-art technology to the geothermal community.

Host state Oregon’s current geothermal capacity and its capability for growth are quite impressive:

• There is about 33 MW of geothermal power on-line in Oregon, which produced 165 GWh in 2013.
• The latest industry survey identified 19 projects under development in Oregon with estimated subsurface resources of 340 MW that developers expect could provide 60 MW of additional power within the next few years if appropriate contracts are secured.
• The U.S. Geological Survey estimates that there are an additional 500 MW of discovered geothermal power resources in Oregon and 1,800 MW of undiscovered resources.
Meanwhile, the international geothermal power market is thriving, with a sustained growth rate of 4 percent to 5 percent and almost 700 projects currently under development in 76 countries. This year, attendees will hail from Canada, Djibouti, Ethiopia, France, Germany, Iceland, Indonesia, Italy, Japan, Kenya, New Zealand, Portugal, Rwanda, Tanzania, Turkey and Uganda, as well as the United States. Together, they represent 17 countries and five continents.

East Africa will be well represented in the Expo. The region is experiencing a significant geothermal boom, and industry experts find that government and industry officials are interested in working with US companies. To help facilitate these connections, the Expo will feature an expanded Power Africa Geothermal Pavilion with representatives present from the leading countries in the region: Djibouti, Kenya, Tanzania, Ethiopia, Rwanda and Uganda. In addition, key personnel working with the East African Geothermal Partnership, a collaborative partnership between USAID and GEA, will be on hand to help companies engage in this exciting growth area.

“Between the Power Africa Pavilion and all the natural discussion of Oregon that will be occurring, we expect a nice range of geothermal opportunity to be represented at this year’s Expo,” said GEA Executive Director Karl Gawell.

Geothermal energy is a firm yet flexible renewable energy source that can bring the reliability of 24/7 baseload power or complement other energy technologies by firming up more intermittent power generation. It can also provide distributed power generation from small co-production projects, with one of the smallest environmental footprints of any technology. Geothermal has the potential to help meet many U.S. states’ Renewable Portfolio Standard (RPS) goals as an alternative to fossil fuels. Recent breakthroughs in Enhanced Geothermal System (EGS) technology for exploiting geothermal resources around the world raise bright prospects for the industry.

Oregon in 2014 is the Newest Geothermal Frontier
The Geothermal Energy Association brings you “Ten Important Facts to Know about Oregon’s Geothermal Power in 2014”:

1. There is about 33 MW of geothermal power on-line in Oregon producing 165 GWh in 2013.
2. The latest industry survey identified 19 projects under development in Oregon with estimated subsurface resources of 340 MW that developers expect could provide 60 MW of additional power within the next few years if appropriate contracts are secured.
3. The U.S. Geological Survey estimates that there are an additional 500 MW of discovered geothermal power resources in Oregon and 1,800 MW of undiscovered resources.
4. Geothermal power provides affordable power according to studies produced in 2014 by the Energy Information Agency, Bloomberg New Energy Finance, California Public Utilities Commission and others.
5. Geothermal power provides significant numbers of permanent jobs. For every 100MW of geothermal power there are 170 permanent jobs supported and development of 100MW of new projects produces over 600 annual construction and manufacturing jobs.
6. According to studies geothermal has the lowest life-cycle emission of any renewable technology besides hydropower.
7. Geothermal power projects have the lowest land density compared to any other renewable power technology.
8. Geothermal power plants can be engineered to be firm and flexible power sources in addition to being source of a renewable baseload power.
9. Geothermal fields can operate for 30 years or longer, the largest geothermal field in North America, the Geysers in California celebrated its 50th birthday this year. Geothermal fields in Italy have been generating electricity since 1912.
10. Every additional megawatt of geothermal power can enable the installation of 3 to 5 megawatt of additional intermittent power like solar and wind power.

The geothermal industry will be meeting in Oregon is less than 2 weeks. To be part of the largest geothermal event of the year, please register here.

Power Africa Pavilion at GEA Expo To Feature Key People from 6 Countries
The East African geothermal boom continues, and government and industry officials are interested in working with U.S. companies. To help make these connections, the GEA Geothermal Energy Expo will feature an expanded Power Africa Geothermal Pavilion (Booth #1150-1168) with representatives present from the leading countries in the region: Djibouti, Kenya, Tanzania, Ethiopia, Rwanda and Uganda. In addition, key personnel working with the East African Geothermal Partnership – a collaborative partnership between U.S. AID and GEA — will be on hand to help your company engage in this exciting growth area. Please also join us for delegate country presentations in the Power Africa Pavilion on Tuesday, September 30 starting at 9:00 am.

At the Power Africa Geothermal Pavilion, senior executives from the following East African institutions will be available to discuss business opportunities open to the private sector in the Pavilion and in one-on-one meetings:

Interested in new business in the East African geothermal market? Come to the GEA Geothermal Energy Expo, September 28-Oct 1, at the Convention Center in Portland, Oregon. If you are a GEA member, and are interested in arranging a meeting with members of the East African delegation while they are in the U.S., contact Caity Smith by emailing csmith@usea.org.

GEA Members Invited to Discuss Japan’s Geothermal Market Next Week
The Geothermal Energy Association will facilitate a conference call for members to discuss the Japan geothermal market with U.S. Department of Commerce on Tuesday, September 23. There will be a short overview introducing the International Trade Administration, then members will be given time to share their experiences and any issues. Please RSVP to leslie@geo-energy.org and juliana@geo-energy.org and include topics you have for this agenda, as it is meant to be a chance for members to discuss experiences or issues you have encountered in approaching Japan’s geothermal market. All GEA members are invited to participate. If you are considering becoming a member of the GEA, contact juliana@geo-energy.org.

EPA Clean Power Plan Comment Period Extended
Via EPA–The comment period on the Clean Power Plan (CPP) proposal has been extended until December 1, 2014. EPA has been following through on President Obama’s directive to extensively engage with the broadest possible range of perspectives while working to develop a plan to cut energy waste and leverage cleaner energy sources. Over the past few months, EPA has hosted numerous meetings, conference calls and webinars to educate and engage stakeholders on the CPP proposal. All interested parties are encouraged to continue to provide detailed comments on all aspects of the proposed rule. Comments can be submitted via any one of these methods:

At BLM Geothermal Lease Sale, Ormat Offers Highest Bid
The Nevada State Office of the Bureau of Land Management (BLM) held a quarterly oil and gas and geothermal competitive lease sale this month. BLM said in a statement, “Two parcels totaling 3,438.19 acres were offered during the geothermal lease sale September 10 that generated $315. The sale high bid for the geothermal sale of $80 for a 40 acre parcel at $2 per acre was made by Ormat Nevada Inc.” Geothermal sale results are posted at http://on.doi.gov/1qCHSsY.

In addition, BLM will hold public sessions in Denver and Sacramento next month, where they will discuss their Resource Management Plans (RMPs). “We hope to improve our land use planning process so that we can more effectively plan across landscapes at multiple scales and be more responsive to environmental and social change,” according to BLM; see blm.gov for meeting information. 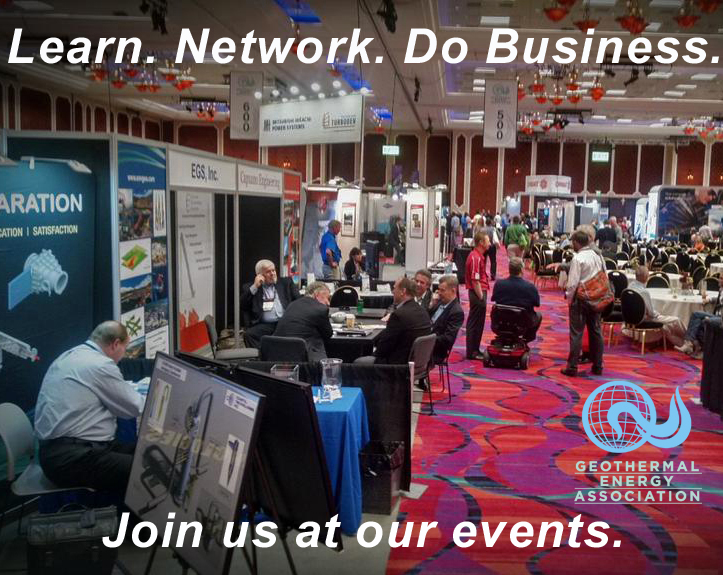