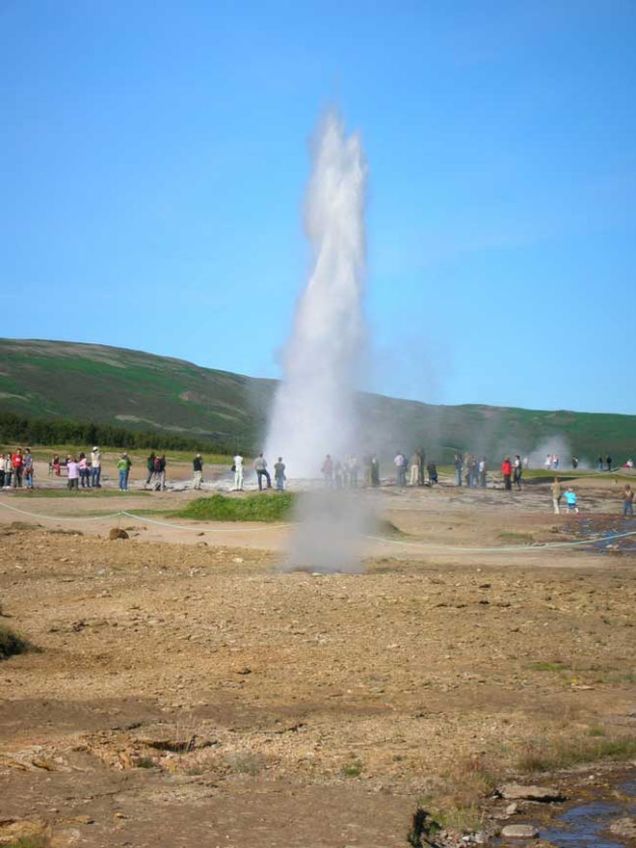 Check out LiveScience’s exploration of what happened to geothermal energy.

SACRAMENTO, CA – California will host the geothermal energy event of the year fromOctober 23-26, just 9 weeks away. This event brings together key players in policy, technology, and industry at the Sacramento Convention Center — the GRC Annual Meeting& GEA GEOEXPO+. Last year, the event hosted more than 1,200 representatives from over 25 countries spanning six continents. With the strong growth in the world market and positive role of policy and new technology that supports that growth, an even larger and more diverse crowd is anticipated this year.
The GRC Annual Meeting will feature over 40 hours of technical presentations, workshops, fieldtrips, a plenary session, networking events and more. The GRC Technical Session programs will cover a wide array of topics pertaining to geothermal energy. The program will cover exciting technological developments such as the work of the DOE in low-temperature systems, innovative drilling tech, and hybrid systems including geothermal mixed with solar at a time when new technological advances are advancing the geothermal industry at a rapid pace.
Four workshops and four fieldtrips will be held at the event. The two-day Conceptual Models of Geothermal Systems and Reservoir Stimulation workshops and a one dayOperations & Maintenance workshop. In addition, there will be a special Geothermal 101workshop.  The fieldtrips will include excursions to The Geysers, the largest geothermal field in the world.
The GRC Annual Meeting this year supports the theme “Geothermal Energy – Here and Now: Sustainable, Clean, Flexible” highlighting the important role and values of geothermal energy today. “This will be the 40th year the GRC has brought together the US and international geothermal community,” said Steve Ponder, GRC Executive Director. Registration is now open for the GRC Annual Meeting.
The GEA is launching an expanded and newly branded event the GEA GEOEXPO+. The event brings to life the theme “Leading Innovation. Fostering Cooperation.”  “It takes the best technology, and a top-notch team to succeed in today’s marketplace, and the GEA GEOEXPO+ is meant to facilitate both,” said Karl Gawell, GEA’s Executive Director. Who are the game changers in the geothermal energy industry? Check out the sessionExhibitors Leading Innovation at the GEA Marketing Forum to see how GEA’s 2016 Exhibitors are paving the way for geothermal development through new projects, products/ services, and technology.
Interested in how federal and multilateral agencies can help geothermal power and possibly your business? Representatives from OPIC, USTDA, World Bank, Ex-Im Bank, US DOE GTO, USAID amongst others will step onto the Marketing Forum stage for theAgency Briefing. The goal- to bridge the gap between US companies and agency opportunities related to financing, grants, project work and resources. Other sessions include a KfW Development Bank Finance, Grant and Investment Workshop.
Visitor registration for the GEA GEOEXPO+ is now open and the GEA Marketing Forum Agenda was released earlier this week. With a multi-dimensional 3-day trade show and marketing forum and ample opportunities for networking, the GEA GEOEXPO+ presents attendees with the opportunity to maximize their exposure at a premier event.
The neighboring Sheraton Grand and Hyatt Regency hotels offer a discounted block of rooms. The discount ends September 28.
If you want to learn more about geothermal energy, consider attending the GRC Annual Meeting or contact Estela Smith at +1 (530) 758-2360 or email grc@geothermal.org for more information.  If your company has a strong interest in promoting its projects, equipment, services, and technology as part of the GEA GEOEXPO+ please contact Rani Chatrath Rani@geo-energy.org +1 (202) 454-5261 to learn more about opportunities still available.
Thank you to GEA Members New and Renewed!
GEA works to put geothermal on the map in Washington, Sacramento, and elsewhere. We depend upon our members support to do so. We work to make a difference so that the industry and your company can succeed.
This week we want to say thank you to following new/renewed GEA Members:

Watch for more thank you’s in future editions of GEW! If you need information about membership go to: http://geo-energy.org/membership.aspx or contact Daniela@geo-energy.org.

The Office of Basic Energy Sciences (BES), in support of the DOE Office of the Under Secretary for Science and Energy’s Subsurface Technology and Engineering Research, Development and Demonstration (SubTER) Crosscut Initiative, announces a Small Business Innovation Research (SBIR) and Small Business Technology Transfer (STTR) funding opportunity that seeks to develop advanced methods to access the subsurface.
While subsurface sources constitute the nation’s primary source of energy, providing more than 80 percent of total U.S. energy needs today, they are also critical to the nation’s low-carbon and secure energy future. Next generation advances in subsurface technologies will enable access to more than 100 gigawatt-electric of clean, renewable geothermal energy, as well as safer development of domestic natural gas supplies. The subsurface provides hundreds of years of safe storage capacity for carbon dioxide (CO2) and opportunities for environmentally responsible management and disposal of hazardous materials and other energy waste streams. These opportunities are directly linked to Administration priorities and to broader societal needs. Clean energy deployment and CO2 storage are critical components of the President’s Climate Action Plan and are necessary to meet the 2050 greenhouse gas emissions reduction target of 83 percent below 2005 levels. Thus, discovering and effectively harnessing subsurface resources while mitigating impacts of their development and use are critical pieces of the nation’s energy strategy moving forward.
The funding opportunity announcement can be found here

Legislation Would Create Jobs and Build on State Leadership

Pasadena, Calf. – Today the California State Assembly approved legislation, Senate Bill 32 (D-Pavley), which extends California’s landmark climate protection policies through 2030. In order to become law, the measure must go back to the Senate for concurrence. Senate Bill 32 is also still dependent on passage of companion legislation.

“The State Assembly voted today in favor of job creation, and to make California a leader in the clean transportation technology industry going forward. We expect that passage of this measure will lead to more in-state manufacturing jobs for advanced vehicles and components,” said CALSTART President and CEO, John Boesel.

The Floor vote on behalf of Senate Bill 32 was led by Assemblyman Eduardo Garcia (D-Coachella). Assembly Speaker Anthony Rendon also spoke in favor of the bill. The historic measure passed by a wide margin with 48 “aye” votes.

The legislation is double-joined with Assembly Bill 197, which still needs to be approved by the State Assembly.

Two small businesses working with Lawrence Livermore National Laboratory (LLNL) will receive more than $350,000 for expertise in advanced gas turbine manufacturing and geothermal engineering as part of the Department of Energy’s (DOE) Small Business Voucher (link is external) (SBV) pilot.
With vouchers in hand, these businesses can better leverage the world-class capabilities of the department’s national laboratories and bring their next-generation clean energy technologies to the marketplace faster.
Specifically, LLNL scientists James Kelly and Jeff Haslam and Annemarie Meike from the Lab’s Industrial Parnerships Office will help Renaissance Services Incorporated (link is external) (RSI) with thermal process analysis and improvements for RSI’s additively manufactured ceramic cores, used in the casting of high efficiency turbine engine components.
Advanced turbine airfoil technologies depend upon complex cooling channels within the high-temperature blades and vanes to maintain temperatures within the safe operating range of metal alloys. These complex cooling channels require porous ceramic cores to form the internal pathways during the metal casting process. Understanding and improving the thermal processing of the ceramic cores is expected to improve production yield, which will reduce costs and significantly improve the commercial viability of this innovative manufacturing approach for turbine components.
A prototype of a porous ceramic core. Lawrence Livermore scientists will help Renaissance Services Incorporated (RSI) with thermal process analysis and improvements for RSI’s additively manufactured ceramic cores used in the casting of high efficiency turbine engine components.
In the other LLNL collaboration, scientists Joe Morris and Rick Ryerson will work with GreenFire Energy (link is external) to develop a novel technology in which carbon dioxide is circulated through deep well bores to harvest geothermal energy.
The process requires drilling to depths below the brittle-ductile transition in crustal rocks, more than 5 kilometers. Completing the connection between the bottoms of two vertical wells at this depth is an engineering challenge. Creation of a fracture network connecting the two wells at depth is one possible solution. However, creating fractures in ductile rocks is difficult — by definition. Rocks that deform in ductile fashion within a particular P-T-strain rate regime may deform in brittle fashion at higher strain rates. Dynamic stimulation using energetic materials, e.g., propellants to explosives, may be useful in tailoring the strain rates in order to induce brittle behavior at the required depth.
With GreenFire, LLNL’s Computational Geosciences Group will undertake a computational effort to assess the feasibility of dynamic stimulation, determining the appropriate energy release characteristics and the spatial and temporal distribution of detonations necessary to enable GreenFire’s novel geothermal process.
DOE opened the first round of SBV, a technology-to-market lab impact pilot, in fall 2015. In SBV’s first round, 33 small businesses were selected to receive vouchers totaling $6.7 million. On Thursday, DOE awarded 43 projects totaling more than $8 million. To date, the DOE’s SBV pilot has connected 76 small businesses with the labs, totaling $15 million worth of vouchers.
With 23 million small businesses currently operating in the U.S., the pilot is heavily targeted in attracting companies that typically would not have access to the national labs’ scientific expertise and resources. The SBV pilot makes it possible to direct the power of the national laboratories toward specific problems identified by small businesses by pairing these companies with a national laboratory uniquely qualified to solve their challenges.
SBV is a collaborative, national effort that provides $20 million for U.S. companies to help improve industry awareness of national laboratory capabilities and provide small and mid-size businesses access to the resources available within the national laboratory system. Following open calls for “Requests for Assistance” (RFAs), businesses are competitively selected to work with a national lab to address their needs, and provided vouchers, worth up to $300,000 at the lab. SBV is part of DOE’s Office of Energy Efficiency and Renewable Energy (EERE) (link is external) Technology-to-Market program.
Link: https://www.llnl.gov/news/lab-collaborates-small-businesses-gas-turbine-manufacturing-and-geothermal-projects